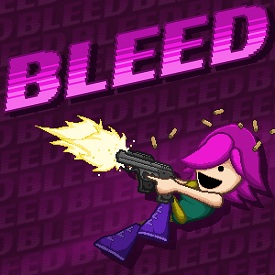 The year was 20XX, a time where worms and dragons were recognized for their acts of heroism. Many of the heroes of that era were immortalized on the shrine dubbed The Hall of Heroes to remember their great deeds. However, it is now the year 21XX and these legendary heroes soon faded into obscurity, content on living off their past glory. Enter Wryn, a spunky girl who wants to become the greatest video game hero of all time. To do that, she'll have to wipe the slate clean by taking down all of the former heroes who came before her and come up on top.
Advertisement:

Bleed is an indie run-and-gun game by Ian Campbell of Bootdisk Revolution. You play as Wryn, a girl with a big arsenal and bigger dreams as she strives to become the greatest video game hero out there by killing off the former heroes, but rest assured, it'll be a task easier said than done. Not to worry as she can arm herself to the teeth with an assortment of weapons at her disposal, and when things really gets crazy, she can also slow time to a crawl when needed.

It was released on December 12, 2012, was originally available on Xbox 360 via the Xbox LIVE Indie Games section for $2.99 up until its closure, however, the PC version (Windows, Mac, Linux) is available via GamersGate, Humble Bundle, Steam as voted by the fans at Steam Greenlight, and itch.io for $4.99. An update for the game has added a two-player co-op feature, allowing you and a partner take down the former video game heroes together.

In September 2, 2014, Ian Campbell has revealed that a sequel

was in the works, and it was released on February 8, 2017 for PC via Humble Bundle, Steam, and itch.io for $9.99. In this installment, Valentine, a psychokinetic girl with aspirations of being the greatest villain of all time, is reigning terror across the world. Now, it's up to Wryn, the only hero the world has, to stop her.

Has absolutely nothing to do with the game Blood and not to be mistaken for They Bleed Pixels (although the protagonist of that game appears as an unlockable Guest Fighter in the second game). If you're looking for tropes pertaining to blood, see Bloody Tropes.