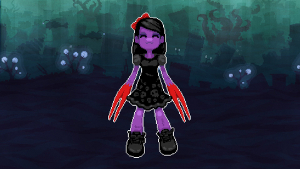 Body Horror has never been so cute.
They Bleed Pixels is a 2012 indie platformer by Spooky Squid Games for PC. Arriving at the Lafcadio Academy for Troubled Young Ladies, an unnamed young girl finds a mysterious book that constantly drips blood. It brings her strange dreams of other times and places, and of another self with purple skin and claws instead of hands—and with each dream, the line between herself and the monster thins...
Advertisement:

They Bleed Pixels combines Super Meat Boy's tough-as-nails style of retro platforming with a one-button combat combo system, all wrapped in visuals inspired by Lovecraft's work. A Macintosh and Linux port of the game was released at the launch of the Crimson Update in 2015, in addition to being rewritten on a new engine with extra content, leaderboards, and more blood.

This video game provides examples of::