"I'm not so sure you can fault it for anything other than being pure nonsense."
— Jhonen Vasquez, and though he's referring to a single story he may as well be summing up the whole book. 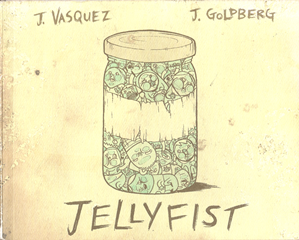 Jellyfist is an single-issue Anthology Comic written by Jhonen Vasquez and illustrated by Jenny Goldberg. The basic conceit was to see what happens when the author and artist are deliberately uncommunicative. The result is about as bizarre as one might expect, especially given the parties involved.

The book is adorned with commentary from the two running down the sides of the pages.