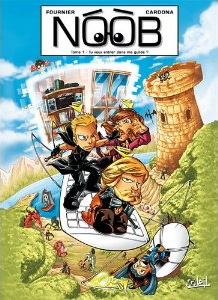 The comic adaptation of the eponymous web/TV series and the second addition to the Noob franchise written by Fabien Fournier (the series's scriptwriter and director) and drawn by Philippe Cardona and Florence Torta, the authors and illustrators of Sentai School who also happen to play Bartémulius and Nostariat in the webseries.

Most of the story happens inside a MMORPG named Horizon 1.1 and follows a guild said to be the worst in the game. In addition to a being a Ragtag Bunch of Misfits that only seems to stay together thanks to the Guild Master and the cooperation-encouraging nature of the game, the guild has an actual Noob as a healer. The first few pages of each book show a Day in the Life for one of the players, making the comic first to reveal anything about the real life of some characters.

The three first comics are a collection of stories of varying length, while the series starts sticking to one story per book as of the fourth one. The chronological situation seems to be between Seasons 2 and 3 of the webseries for the five first books, with the sixth and seventh starting to tie in with Season 3 events. The comics would however need to be their own continuity to avoid a Continuity Snarl.

A translation into English via ComiXology has been announced. The translation will start with comic 4 (the first to not be a collection of short stories), thus likely making comics 1 to 3 No Export for You.

The character sheet is shared with the other media.

The Noob comic provides examples of: