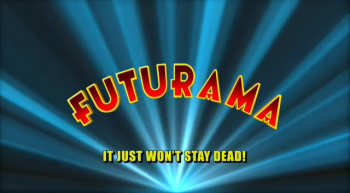 The noise you are hearing is the sound of thousands of nerds cheering.note It later got canceled and un-canceled a second time.
Peter: Everyone, I've got bad news: We've been canceled.
Lois: Oh no, Peter, how could they do that?
Peter: Well unfortunately, Lois, there's just no more room on the schedule. We've just got to accept the fact that Fox has to make room for terrific shows like Dark Angel, Titus, Undeclared, Action, That '80s Show, Wonderfalls, Fast Lane, Andy Richter Controls the Universe, Skin, Girls Club, Cracking Up, The Pitts, Firefly, Get Real, FreakyLinks, Wanda At Large, Costello, The Lone Gunmen, A Minute With Stan Hooper, Normal, Ohio, Pasadena, Harsh Realm, Keen Eddie, The Street, American Embassy, Cedric The Entertainer, The Tick, Louie, and Greg the Bunny.
Lois: Is there no hope?
Peter: Well, I suppose if all those shows go down the tubes, we might have a shot.
— Family Guy (taking this trope the wrong way)
Advertisement:

If the show got enough advance notice of its cancellation to have a Grand Finale, being Un-Canceled transforms it into a Series Fauxnale, followed by a Post-Script Season.