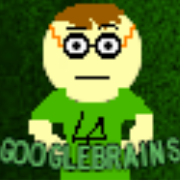 is a YouTube channel that hosts videos, most if not all of which are usually perceived as mediocre. The channel consists of content created using GoAnimate and a little bit of gaming, among other things.