Western Animation / A Kind of Magic 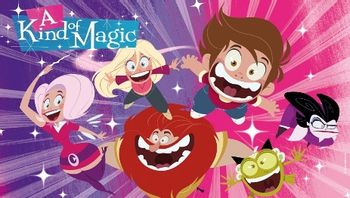 A Kind of Magic (known as simply Magic in French, and A New Kind of Magic in the second season) is a French animated series that originally ran from 2006 to 2009.

In Fairyland, fairies and ogres don't get married. It just doesn't happen! Willow the fairy and her beloved husband Gregore, a reformed ogre, have no choice but to emigrate and settle in the real world with their children Tom and Cindy. And boy are they unprepared! Here in the real world, there is no guarantee of a happy ending, especially when you add to the mix the other dysfunctional members such as Ferocia, the colorful, sharp-tongued witch, or His Highness, the Toad, still in search of that magical kiss. This ill-equipped and maladjusted family of immigrants goes from one blunder to another and it is going to take every ounce of courage and street smarts that Tom can muster in order to protect his family from all the curious intruders, for whom magic is more than a little bit strange!

A second season was announced for a long time, but nothing came of it until February 2018, when the show came back with 52 episodes (which the first season only had half of) and aired on Gulli in France. The episode "My Dad the Super Hero" was released in English on the Xilam site until it disappeared with the redesign. In 2019, the official YouTube channel has finally started to release the episodes starting with "Candy Through the Looking Glass", and has every single episode of season 1.

It's a kind of trope: