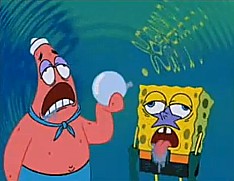 Generally played for comedy, with the afflicted people talking in exaggerated "stupid" dialect and making decisions that are a Take That! against whatever the writers oppose. In almost all cases, the effect hits both "book smarts" and "common sense", even though they're different kinds of intelligence. For extra fun, one character will be functionally immune to the effect due to already being stupid.

Can be used to justify the Idiot Ball, as opposed to Plot-Induced Stupidity, which does not bother with an explanation.

When someone's using this as a weapon, it's a type of Stupidity-Inducing Attack.