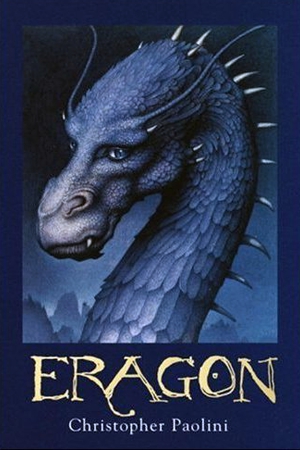 The book is about a farmboy named Eragon who finds what he believes to be a stone while hunting in the mountains. It is revealed to be a dragon egg, and Eragon bonds with the dragon hatchling, whom he names Saphira, and becomes a Dragon Rider. Following the death of Eragon's uncle and the destruction of their farm, Eragon and Saphira set out on a quest for vengeance against the Empire and its Dragon Rider king, Galbatorix, once he finds out about the egg and sends monstrous servants to obtain it.

Paolini began writing Eragon after graduating from home school at age 15. He spent one month planning out the whole Inheritance Cycle series, one year on the first draft of the novel, and another year rewriting to flesh out the story and characters. Upon his parents seeing the final manuscript in 2001, Paolini's family decided to self-publish the novel; they spent a year touring across America promoting the novel, with Paolini giving talks while dressed in a medieval costume. However, this campaign didn't attract nearly as much attention for the book as its discovery by Carl Hiaasen in 2002, who got it re-published by Alfred A. Knopf in 2003.