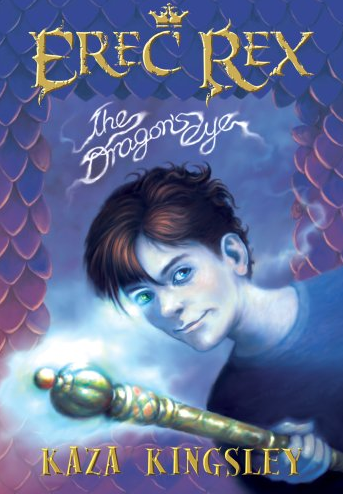 Erec Rex is a fantasy novel series by Kaza Kingsley (Kaza rhymes with "jazz-a", by the way).

Erec Rex has only one eye. His foster siblings are all unique; one can't walk, one doesn't talk, and one a little bit wild, plus two older twins, who are just teens. Not even monstrous ones. They're also all adopted, collected like stray cats by a kindly woman named June O'hara. (Erec himself was abandoned at the age of 3 by his father.) She works multiple jobs and moves around a lot just to care for them, but for the most part, their lives are happy, if a little weird—their mother has a habit of ordering strange, oddly lifelike electronics from a company called "Vulcan."

Erec, however, has a strange gift—he gets "cloudy thoughts" which compell him to do things he wouldn't normally know/want to do, like saving someone in trouble. One day, shortly after his mother goes out to a job interview, he gets such a thought to go look for her. He tries to resist it, but inevitably it leads him into the companionship of a girl named Bethany, and together, they go down—beneath the sidewalk, into a strange, subterranian mall, on a ski lift that takes them into a place called Alypium. Alypium is one of three worlds near our world "Upper Earth," that still remember magic. And Erec has a few more ties there than he'd suspect.

At first, given the impovrished life he comes from, the magical Alypium seems like a paradise—and he even has a chance to enter a contest to become a King. But as time goes on, he begins to realize that this whimsical Magical Land, while pleasant on the surface, is stewing in vileness just beneath. Only he can right it, and he isn't even sure why. Luckily, he has the assistance of his mother, Bethany, and a number of friends ranging from the small (like Jack and Oscar) to the really, really big (like the dragon Aosqueth). Too bad they seem to be his only friends, and as the world quickly turns against him, he must combat both his enemies and his bad publicity to save all the worlds once and for all.

It's planned to be an eight-book series