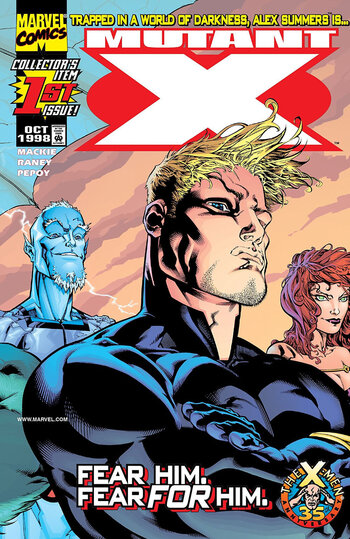 Havok finds himself in a world of darkness. No, not the game.
Mutant X was a comic book associated with the X-Men universe and its related characters. It began in 1998 and was written by Howard Mackie. After 32 issues and three annuals, it ended in 2001.
Advertisement:

The plot centers around Havok (Alex Summers) of the main Marvel Universe (Earth-616), though it takes place on the alternate Earth-1298. The story begins when the mainstream Havok is supposedly killed by an explosion while, at the same time, the Havok of Earth-1298 is seemingly killed by a Sentinel. Mainstream Havok finds his way into the body of his counterpart, and awakens in a world that is both familiar and alien. The story primarily focuses on Havok and his team of mutant heroes, the Six, and their efforts to stop world ending threat after world ending threat.