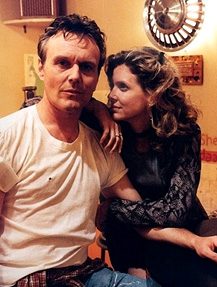 Welcome to the debut of writer Jane Espenson! Mayor Wilkins is meeting with Mr. Trick, who says he has outsourced a job to someone who's worked in Sunnydale before, and can give the Mayor what he needs. Wilkins says he's made "certain deals" to get where he is today, and one of his campaign donors requires a tribute.

At school the next day, the Scoobies come upon Principal Snyder handing out boxes of candy. Snyder gives them each a box of chocolate bars and summarily orders them to sell it to raise money for new band uniforms. Buffy manages to talk her mother into buying half of her stock. Having gotten rid of those, Buffy says she's gotta run, as Giles is expecting her to train. Joyce opines that Giles is monopolizing Buffy's time, but she's already out the door.

The library. Buffy cops out of training early, explaining that Joyce is on the warpath, and breezily exists. Giles smells a rat.

Sure enough, Buffy goes to the mansion to bring Angel some fresh blood. He says he's getting stronger.

When she arrives home, Buffy finds her mother and Giles waiting for her. Cue the fireworks. After Giles steps in to mediate (telling them not to "freak out"), Buffy is sentenced to her room, leaving the adults to munch on chocolate bars. At a factory somewhere in Sunnydale, a workman is about to do the same thing, but Ethan Rayne stops him.

"Trust me, you don't wanna eat that."

The next day, Giles fails to show up for study hall. Worried, Buffy goes to Giles' place and finds her mom sitting on the couch. Giles explains that they are rescheduling her activities to lessen her burden, and Joyce hands Buffy her car keys and invites her to drive herself home. Delighted, Buffy snatches the keys and leaves in a cartoon cloud of dust. Joyce makes a "whew" face, and wonders if Buffy sensed anything amiss. "No way!" says Giles, lighting up a cigarette as Joyce takes a bottle of Kahlua out from hiding. Wat.

Meanwhile, Buffy and Willow arrive at the Bronze to find it largely populated by adults acting like...well, teenagers. Snyder comes up and puts his arms around the two of them (!), then snorts that the other teachers are wasted. Teen Snyder is fun, though a bit clingy to the "Scoobies." Buffy decides to find out what's going on, and Snyder tags along. They all pile back into the jeep to find Giles.

Speaking of which: Giles - sorry, Ripper - and Joyce are downtown, behaving like a couple of lovestruck teenagers. Joyce stops to admire a jacket in a store window ("Very Juice Newton.") Ripper swings a garbage can into the window, breaking it as the alarm goes off. He grabs the jacket and A Clockwork Orange-type hat as Joyce giggles mischievously.

Buffy observes a lot of adults hanging out, and realizes that something's missing — namely, vampires. They quickly deduce that the candy is cursed, and that the whole exercise must be a diversion. Buffy grabs Snyder and asks if he knows where to get the candy, which he does. Oz and Willow head off to the library to research the problem while Buffy and Snyder head to the source, which is...

...a factory at which a crowd of people are clamoring for more candy. Buffy wins a free trip to Therapyville as she sees Ripper and Joyce making out. Finally, Buffy jumps up onto the loading dock and finds Ethan inside the factory. Buffy and Ripper chase him down and make the weaselly warlock reveal the plan. He says the candy was just to render the town helpless while Trick and his vampires collect a big tribute for some demon named Lurconis, but he doesn't know the what. We get an answer to that question as a troop of vamps enter an unsupervised maternity ward and steal all of the newborns.

Ripper has a flash of memory: Lurconis is related to filth, so he probably resides in the sewers. Down below, the ritual is underway, where hooded vamps chant ominously while the Mayor looks on. Buffy drops in and engages Trick's vampire minions in combat while Ripper and Joyce wheel the babies to safety. Wilkins beats a hasty retreat. Trick and Buffy get ready to rumble, but Ripper hauls off and throw a solid left to Trick's face — but he's unfazed. He shoves Ripper into the Lurconis' feeding pool, distracting Buffy long enough for Trick to make his escape. A rumbling starts, and an enormous, snake-like head emerges from a nearby tunnel. Buffy, thinking quickly, rips open a gas line, forming a jet of fire that sets Lurconis ablaze.

At school, a sober Principal Snyder commandeers Willow, Oz, Cordelia and Xander to help clean up some graffiti. Buffy puts the damage done to her mom's car in perspective by reminding Joyce and Giles, "At least I got to the two of you before you actually did something." Giles and Joyce hastily walk in opposite directions.