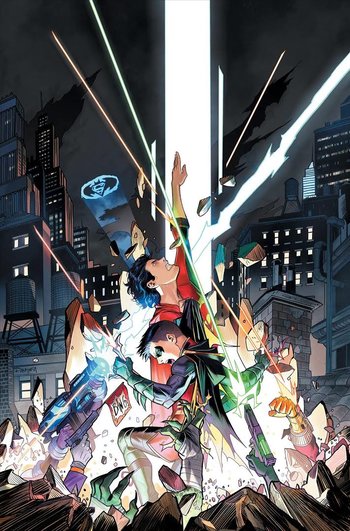 "I'm back. Sorry that took so long."
Jon: It's the Summer of Super!
Damian: Seriously, I will pay you eight million dollars to stop saying that.
Advertisement:

The boys are back!

Following on from Super Sons, Adventures of the Super Sons is a twelve issue maxi-series that began in September 2018. Set before Man of Steel, it chronicles the continuing adventures of Damian Wayne and Jonathan Kent. Their first adventure? Battling a younger version of the Injustice Gang known simply as "The Gang," led by Rex Luthor.

Whilst Peter Tomasi retains his role of writer, Jorge Jiminez is now drawing for Justice League and therefore only draws the variant covers for this series. The new artists are Dan Mora and Art Thibert.