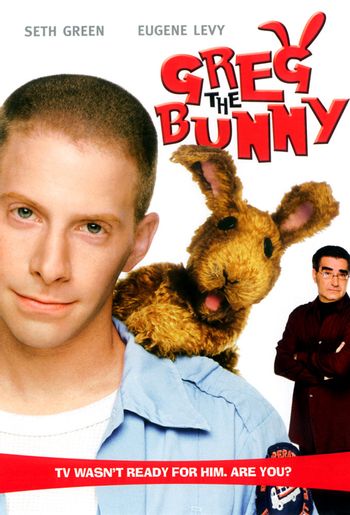 Greg The Bunny was a Sitcom set in a world where humans and puppets coexist as sentient races and interact freely. Greg the Bunny is the starring puppet of a Alternate Company Equivalent to Sesame Street; the show focused on back-stage shenanigans. In this case, Greg and the others in the cast are much less innocent offstage than on, contrasting with both The Muppet Show and other puppet shows fully on the cynical end of the Sliding Scale of Idealism Versus Cynicism. (The series was something like Who Framed Roger Rabbit.)

Extra drama was created because Greg is a relative newcomer to the cast - he replaced another rabbit because he was much cuter.

Despite the relative cynicism, this show did have heartwarming moments and good spoofs thereof.

This show was greatly respected by critics but didn't get enough of an audience. It did one season on FOX and two on the Independent Film Channel...

Greg and the crew returned in MTV's Warren The Ape, which aired for one season in 2010.