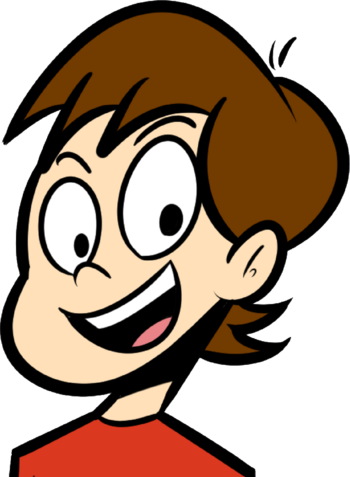 "Welcome back to Ben Rants, and when I was a kid ..."
Advertisement:

Ben Rants consisted of several different topics in its initial run, such as rants on TV shows, movies, lists of favorite TV shows and movies and occasionally giving out his thoughts on topics (and one singing segment that Ben deeply regrets).

Because Ben couldn't log in on his PuffyZillaman4 account, Ben Rants was put on hiatus for weeks after his infamous rant on The Looney Tunes Show leading to speculation that his videos had ended for good. But Ben created a new channel called Benthelooney and the series resumed on July 26th, 2011 after a month and a half hiatus.

After 90 videos, Ben Rants finally ended production in December of 2011 with very little fanfare, because Ben wanted to retire from ranting and focus on positive videos. Two months later, after a surprisingly large amount of fan requests and Ben Tannehill discovering new topics to talk about, the show was put back into production on February 10, 2012.

Ben later retired Ben T. Looney on 13th December 2013 (although this time because Ben will be too busy pursuing his dreams of being an animator at college) and continued making videos as himself for the sixth and last season. But then he decided to bring back Ben T. Looney one last time until June.

The series officially ended on June 6, 2014- that is, until he brought it back AGAIN in November 2015. He ended the series and retired the Ben T. Looney character for real in June 2016, and Ben began to make videos as himself, mostly featuring him working on various pieces of artwork.

Due to low viewership on his newer videos due to recent controversies, Ben brought the series back from the dead in August 2019 with a new formula, which he described as "not knowing if it's gonna be a positive rant or a negative rant." Although the Ben T. Looney character was brought back as well, it functions more or less like an avatar. In Mid October 2019, due to major confusion, he turned his positive rants back into Ben Salutes videos. In Mid 2020, he announced that he would be going back to making cartoons, with a series titled "Alright Cartoons'', and so Ben Rants has ceased production again.