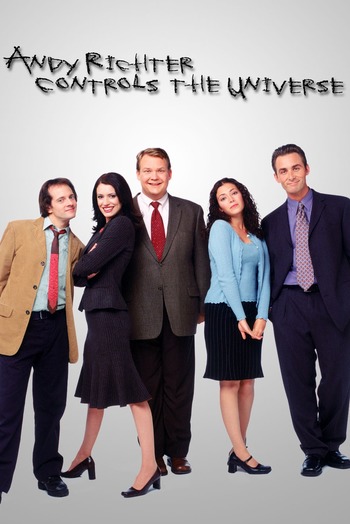 Andy Richter Controls the Universe was a 2002-2003 Fox Work Com series from Victor Fresco, who later made Better Off Ted. A total of 19 episodes in two seasons. It was the first series to star Andy Richter following his departure from Late Night with Conan O'Brien.

Andy Richter plays Andy Richter, an aspiring writer living in Chicago who wants to write short stories. However, he is forced to work as a technical manual writer for Pickering Industries, the fifth largest company in America, even through he doesn't really want to, to pay the bills.

The unique aspects that diferenced the series from other sitcoms was Richter's voiceover, which essentially narrated the plot as well as Andy's thought processes in each episode, and secondly, and connected to the first, Andy's imagination, which was presented onscreen as if it were reality until it was revealed in a smash cut accompanied by the sound of rewinding audio tape. This was often used to demonstrate alternatives to what actually happened for a given event. These fantasy sequences inspired the original working title, "Anything Can Happen," a sentiment Richter expresses in the series premiere's opening narration.