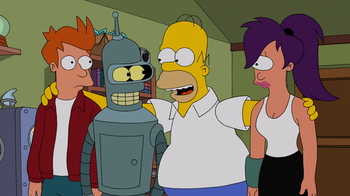 Springfield Elementary is making a time capsule which Bart throws in a sandwich with his snot in it. That night at the Simpsons home, something drops from the air into their yard and sneaks into the house. It turns out to be Bender who doesn't remember why he's there. After some misadventures, Lisa takes Bender to Professor Frink who manages to reboot him where he reveals he's been sent back into the past to kill Homer for inadvertently causing an outbreak of mutated bunnies in the future. The rest of the Planet Express crew arrive in the past and, after some investigation, find out it was due to Bart blowing into the sandwich, Milhouse's lucky rabbit's foot and the toxic waste falling into the capsule that gave rise to the creatures. Both groups return to the future and manage to lure the creatures into Madison Cube Garden and launch it into space. The Simpsons return to the present where Bender shuts himself down so he can return to the future the slow way.

Meanwhile on Omicron Persei 8, the creatures have landed on the planet just as Lrrr and Ndnd are entertaining Kang and Kodos.

This episode has the following tropes.