Western Animation / Maggie Simpson in "The Force Awakens From Its Nap" 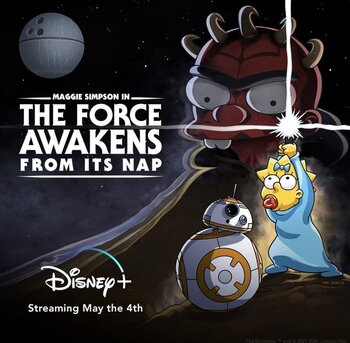 Maggie Simpson in "The Force Awakens From Its Nap" is a 2021 animated short based on The Simpsons and Star Wars. Directed by David Silverman, it is the third Simpsons cartoon short following The Longest Daycare and Playdate With Destiny.

Marge drives Maggie to a Star Wars themed daycare called the Jabba's Hut Jedi Preschool. In there, they see a Jedi prepare sandwiches with the use of a lightsaber and the force, and a baby being put in carbonite for being bad. When General Grievous takes Maggie's pacifier and throws it away, Maggie teams up with BB-8 to get it back.

The cartoon was released on Disney+ May 4th in honor of "Star Wars Day", marking this as the first short not to be given a theatrical release. It is also the first in a series of Disney themed shorts with The Simpsons.