Series / Shop 'Til You Drop 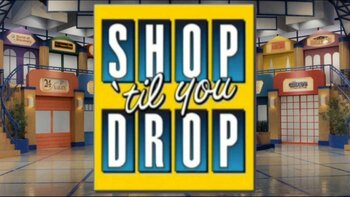 The wildest shopping game ever!
Advertisement:

Long-running Game Show franchise produced by Stone-Stanley Entertainment where two teams of two players competed for prizes by completing various stunt/trivia games, set inside the center court of a mall. Round 1 stunts were worth 100 points, and Round 2 was worth 200; winning a stunt also allowed the team to pick a prize from one of the mall's stores.

The maingame ended with the Shopper's Challenge round, a 90-second rapid-fire Q&A with correct answers worth 50 points. After time expired, the team in the lead played the bonus round.

The show is notable for having been Un-Canceled twice, with each uncancellation also involving a Channel Hop — it aired on Lifetime from 1991-94, The Family Channel from 1996-98 (officially titled The New Shop 'Til You Drop), and PAX beginning in 2000. Pat Finn hosted until 2002, when the show went into repeats for a year; it returned in 2003 with JD Roberto as host, running until 2005. GSN has aired all of Finn's PAX era, the Family Channel era and even part of the Lifetime era, beginning in December 2013.

Compare and contrast Supermarket Sweep, which it was paired with during the Lifetime and PAX eras.