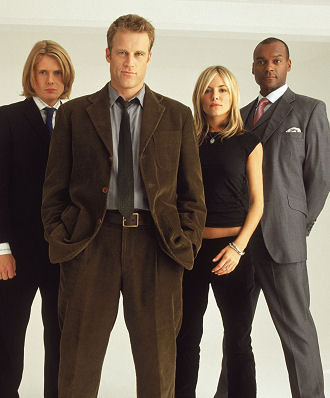 "I'm Eddie. How do you like me so far?"
"Even in darkness, a keen spirit discovers light."
— Eddie's fortune.
Advertisement:

Keen Eddie was a short lived cop show from the early noughties starring Mark Valley, Sienna Miller and Julian Rhind Tutt. Eddie Arlette, a detective from Manhattan, is taken in when he develops feelings for a duplicitous informant. She and a peculiar chemist trick him into planning a drug-bust for the wrong warehouse, and as a result of his mistake, inadvertently supplies London's drug lords with a year's worth of oxycodone. But Eddie's the only one who can ID the chemist, so he's forced to follow them off to merry old England and atone for the mess he made. He arrives to discover that Fiona Bickerton, the beautiful but prickly daughter of the people he's subletting his flat from, is still living there while she's supposed to be at university, and due to their circumstances, the two become unwilling roommates.

Fiona despises Eddie, and that seems to be a sentiment shared by the rest of London, give or take, including the criminal element and the Metropolitan Police Department (Scotland Yard). Eddie's boss, superintendent Nathaniel Johnson, is a stoic hardass with an over-developed ambition for career advancement, who doesn't seem amused by Eddie's American ways. Even Eddie's dog, Pete, bites him regularly. About the only person in town who doesn't want Eddie's head on a plate is his partner, Inspector Monty Pippin, a deceptively spiffy mod with a wild private life. He makes Eddie seem like a prude in comparison and has little interest in controlling himself, but Eddie sees the good in him, and they still manage to get along fine. Together they take down the oxycodone ring and manage to do a lonely man a good turn.

Somewhere between Moonlighting and Starsky & Hutch in tone, this isn't exactly a Fish out of Water show so much as a They Fight Crime! situation. In the first few episodes, the show tends to be more in the Guy Ritchie line than anything else, with blingy editing, techno music, outlandish fight scenes, glamor and sex-appeal riding the surface, desperately trying to look cool. But beneath all the flash is a story about a man who clings to his belief in humanity and gravitates toward lost souls, risking life and limb to bring them back from the edge. He does everything he can to help people — not just the victims of crime, but criminals as well. Even his friends aren't safe from the Care-Bear Stare that is Eddie Arlette. All of this becomes obvious within a few episodes, but by the time the show hit its stride, it was too late. Only thirteen episodes were made and, due to being yanked around the schedule and buried, only a handful aired on FOX before it was unceremoniously canceled. Many people who saw the show caught it on the Bravo airings. It was last seen on the "Sleuth" channel.

The last few episodes of Keen Eddie make the relationship arcs apparent and give the viewer an idea of what they could have expected in the second season: Eddie's only mechanism for coping with change is to force his surroundings to adapt to him, but London actually seems to be warming to the idea. His dog still bites him, though.