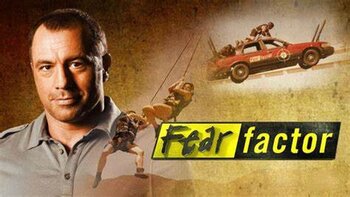 "The stunts you are about to see were all designed and supervised by trained professionals. They are extremely dangerous and should not be attempted by anyone, anywhere, anytime."
—Joe Rogan at the beginning of each episode.
Advertisement:

Stunt Game Show / Reality Show hybrid that featured contestants attempting to outperform each other in various stunts to win $50,000 cash. Each show usually featured at least one stunt involving heights, one involving coming face-to-face with or consuming something revolting, and one involving a Hollywood action movie-type feat. Failure to complete a stunt, being too scared to attempt it, or placing too low resulted in elimination.

The show usually pitted six individual contestants (three men and three women) against each other, but occasionally featured couples or teams competing. Also, special tournaments were held in which players could win much more than just $50,000.

A 2011 Revival aired for one year on NBC, still on Monday nights, still with Joe Rogan hosting.

In 2017, MTV rolled out its own revival, hosted by Ludacris. It also lasted one year.

Not to be confused with Fear Factory, an industrial metal band.

"And evidently, fear was not a factor for you."