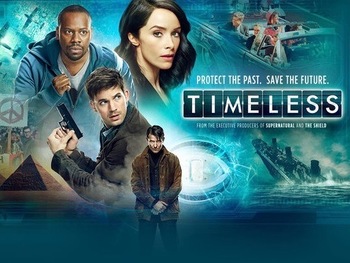 Protect the Past, Save the Future.
Timeless is a 2016 NBC series, created by Eric Kripke (Supernatural, Revolution, The Boys (2019)) and Shawn Ryan (The Shield), about an unlikely trio of time-travellers. When criminals steal a time-machine, our heroes — Dr. Lucy Preston (Abigail Spencer), a history professor, Sergeant 1st Class Wyatt Logan (Matt Lanter), a US Army Green Beret, and Rufus Carlin (Malcolm Barrett), a genius engineer who helped design the time machine — must travel back in time to protect history as we know it.
Advertisement:

What follows is the crew going to famous points in history, foiling Rittenhouse's plans, and attempting to maintain the status quo of the pre-established timelines, in order to stop Rittenhouse shaping history to their will and taking over the world.

It was cancelled on May 10, 2017, then Un-Canceled by NBC due to major fan backlash three days later. Season 2 premiered on March 11, 2018 in the US, and premiered on E4 on April 4th in the UK. The series was canceled again on June 22nd, 2018 but on July 31st, it was announced a special two-hour movie would wrap up its plot points in a huge finale. The finale in the US aired on December 20, 2018, while the UK aired it over a fortnight (instead of one big movie); the first part aired the 23rd April, the second part aired on the 30th April.