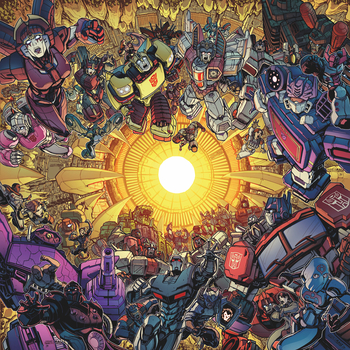 Dread it. Run from it. Destiny arrives all the same. And now it's here.
Advertisement:

The Transformers: Unicron is a 2018 six issue Crisis Crossover comic and the final storyline of the IDW's original Transformers universe, which rebooted after the mini-series.

Thanks to the machinations of the evil Shockwave, Unicron, the world eater, approaches with an endless appetite. After feasting on all of Cybertron's colony worlds, it moves in for the main course of Cybertron itself (with a side of Earth). And despite the desperate actions of the heroes it’s starting to look like no force in the galaxy can stop the end from coming.

Warning: As the final story of the IDW Transformers comic series, this article contains unmarked spoilers for previous comics.

The Transformers: Unicron provides examples of: