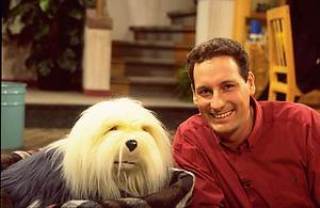 Samson en Gert (Dutch for "Samson and Gert") or (Fred et Samson in Walloon) is a hugely popular Flemish children's program that ran from 1990 until 2005. A movie was made in 2008, along with a Christmas special. In 2010, a 20 year anniversary special was made. In 2014 and 2017, respectively, two spin-off winter and summer series were produced.

The show revolves around Samson, a talking bobtail, and his owner, Gert. Samson is a hand puppet who usually sits inside his dog basket. He is a very naive, but well meaning character who frequently mispronounces words and has to be corrected by Gert or the other humans in the room. The show relies heavily on Catchphrase jokes.

Samson and Gert are frequently visited by friends, usually in function to the plot. Some characters (like neighbour Joop Mengelmoes and Jeannine de Bolle, the mother of Octaaf) were only present in early seasons and then replaced by new characters. Other former invisible characters were later played by actual people. The most prominent characters over the course of the show's lifespan are Alberto, a barber who enjoys singing opera; the mayor of the town, who is interested in toy airplanes; the mayor's hyperactive secretary Van Leemhuyzen and Octaaf de Bolle, the selfimportant owner of a grocery store and hobby gymnast. Every episode closes with a moral and a "Everybody Laughs" Ending.

The program quickly became an enormous success, which was increased once the show was broadcast in the Netherlands. It was also dubbed in French. It became a huge Cash-Cow Franchise with aggressive merchandising which spawned Studio100, one of the largest European entertainment companies. Samson's name has lead to comic strips, bread, clothing, toys, a magazine, films, Christmas shows, CDs, DVDs and even an amusement park note  Actually several amusement parks such as Plopsaland, Plopsa Indoor Hassalt, Plopsa Coo, and Plopsa Indoor Covert .

Beginning in 2008, a Walloon version of the show known as Fred et Samson begun airing in the French regions of Belgium alongside newer actors playing the actors. Similar to the original Flemish version, the Walloon actors also make live appearances at various stage shows.

On November 2019, Gert announced that he was leaving the series. Studio 100 decided to create a special farewell song

sung by the titular duo. In December 2019, Samson got a new companion named "Marie" and the show was retitled "Samson & Marie".