Comic Book / The Transformers: Requiem of the Wreckers 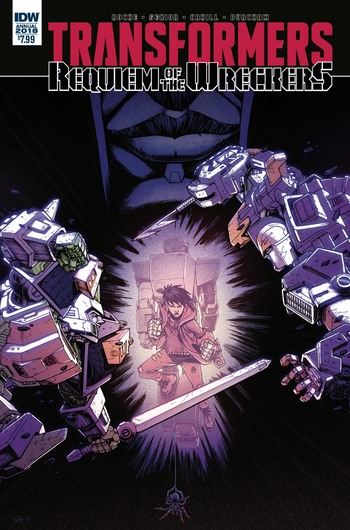 Requiem for a Dream.
Advertisement:

In the two years that have passed since Wreckers' final mission, Springer and Verity Carlo have been keeping a low profile, living together in a barn off the grid. Via a Cybertronian communications array left to them by Prowl, they listen in on radio chatter to keep up to date on goings-on out in the world, from the rise of firebrand anti-Cybertronian politician Megan Guiglione, to the shocking news of Kup's recent death. Already struggling to process what Verity has told him about his true origins as a creation of Tarantulas's, Springer is hit hard by the passing of a 'bot who was like a father to him, and decides to seek out the only remaining link to his past, Impactor—last seen joining up with the Cybertronian terrorist organization Mayhem—for a heart-to-heart talk. Before they hit the road to meet Impactor, Verity, concerned by phantom traces of outgoing communications she has found on the array, runs a diagnostic on the machine. While she waits for a handset to synch with it so she can monitor the results remotely while they are away, Springer tells her the story of how he first met Impactor...