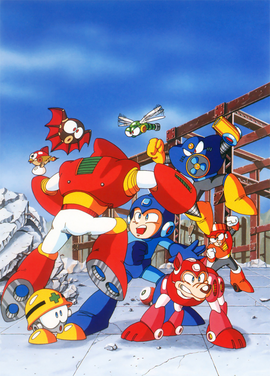 The Rock goes portable...again.
The second of the five Mega Man games to be released on the Game Boy. Mega Man II (aka Rockman World 2) may have almost the same name as Mega Man 2, but it's a very different game. Boy, is it different...
Advertisement:

There's a little more of a plot compared to the previous game — this time around, Dr. Wily has used a stolen time machine to travel into the future, and brought back some rebuilt versions of the Robot Masters from the second and third NES games. Along with the Robot Masters, Wily has brought back Mega Man's own future self, who has been corrupted into an evil robot known as Quint, who is armed with the Sakugarne, a deadly cross between a jackhammer and a pogo stick. Yes, really.

This game was released just five months after Dr. Wily's Revenge, and both the rushed development schedule and developer Biox's unfamiliarity with the series are rather apparent in the rather odd storyline and various aspects of the gameplay. Unsurprisingly, this proved to be the only Mega Man game which the company ever worked on.

Aside from all that, the gameplay is much the same as in the NES Mega Man 3, meaning that E Tanks, the slide move, and Rush are introduced for this entry. In addition, despite the game's numerous other flaws, it did introduce what would become the standard format for the three following games, which consists of four full Robot Master levels and fights, followed by another four Robot Master levels and fights (as opposed to the previous game, which just gave you four Robot Masters from Mega Man with corresponding stages, followed by a Boss Bonanza of the Mega Man 2 Robot Masters).

The remaining Robot Masters from 3 NES were held over until the following Game Boy outing.