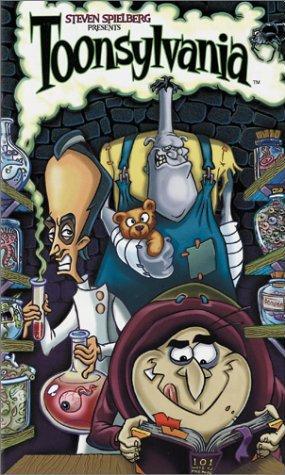 Toonsylvania was an animated show that lasted for two seasons on Fox Kids in 1998-99 (though reruns of the show aired on Fox Family and some overseas Fox Kids channels until 2000). It was created by Bill Kopp (the creator and voice of Eek! The Cat) and Jeff DeGrandis and produced by Steven Spielberg, and was one of the first animated works to come from the then-newly created DreamWorks studios. Much like Spielberg's earlier works (Tiny Toon Adventures and Animaniacs), it was a multiple shorts cartoon show. Each episode was split into four parts (at least in season one; season two underwent a change in format):

In season two, showrunners Bill Kopp and Jeff DeGrandis were replaced with Paul Rugg (the voice of Freakazoid and Mr. Director) and the show became more like a horror version of Animaniacs, which, along with moving from Saturday morning to Tuesday afternoons (especially around the time that free-to-air networks were phasing out the weekday afternoon cartoon line-up in favor of talk shows and more people tuned into cable to watch cartoons), resulted in the show being cancelled as the ratings declined.

The show hasn't aired on television since 2000. It had a VHS release around the time that it stopped airing on TV, but the video was just a "best-of" compilation of episodes from season one (even though the season two opening was used). On January 2014, Netflix streaming (the Brazilian and Mexican feed) had the entire series (including two season two episodes that didn't air since FOX canceled the show due to low ratings), and as of late 2014, it's no longer running.