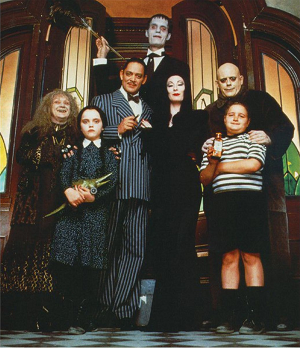 These families are not like the others: they range from friendly monsters to real psychopaths, and sometimes friendly psychopaths. Well, families tend to have things in common. Members tend to look, behave and act similarly, whether because of genetics or upbringing, a family normally has traditions, internal rules, shared hobbies and a whole microculture. This is what happens when the family is unusual.

The two most well-known examples are The Munsters and The Addams Family. Both sitcoms ran from 1964 to 1966 and shared a basic premise; a family that scared people, and both were not only amazingly successful but also had a strong impact in popular culture. Other than that they had a key difference: the Munsters are monsters acting like humans, the Addamses are (ostensibly) humans acting like monsters.

A case of It Runs in the Family and very often a behavior that identifies The Clan, most of the cases show a Nuclear Family albeit often with cases of Nephewism and, ironically, in most examples they are not Dysfunctional Families. Nonhuman examples often involve a Monster Mash via Random Species Offspring. Sometimes overlaps with Quirky Household, when is an entire village is a case of Halloweentown. Contrast with The Family That Slays Together for the horror version, not to be confused with Creepy Uncle.

The Addamses are an extensive clan from the old world, all of them notable for being creepy, kooky, mysterious and spooky.

The Addamses are an extensive clan from the old world, all of them notable for being creepy, kooky, mysterious and spooky.