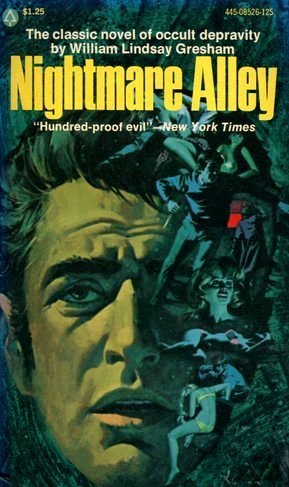 Nightmare Alley is a noir crime thriller written by William Lindsay Gresham that was first published in 1946.

Stanton "Stan" Carlisle is a mysterious and ruthlessly ambitious young man with a troubled past who works as a sleight of hand magician in a travelling carnival. Desperate to make more of himself and willing to do anything to make it happen, Stan seduces the carnival's resident mentalist and Fortune Teller, Madame Zeena, who subsequently takes him under her wing. Stan's efforts to spend time with the talented Zeena and learn her complex "code act" eventually leads to the accidental death of her alcoholic husband and Stan, now adept in the art of cold reading quickly grows bored and switches his focus to the sweet and innocent Molly, the carnival's "Electric Girl".

Leaving the carnival together, Stan and Molly later wed and make a success of their new team code act with Stan working as the mentalist and Molly as his beautiful assistant. But again growing bored and desiring more well heeled and influential marks, Stan reinvents himself as the Reverend Carlisle, an upstanding spiritualist preacher that offers to perform séances for his occult interested wealthy clientele in order for them to contact the spirits of their deceased loved ones.

The strain of leading a false existence soon begins to take a toll on Stan's already fragile mental state and he seeks the help of a mysterious and seductive psychologist named Dr. Lilith Ritter, not realizing that she is an even more duplicitous and ruthlessly manipulative con artist than he is and will be instrumental to his eventual downfall...

The novel was first adapted into a cult noir film of the same name in 1947 starring Tyrone Power, Joan Blondell, Coleen Gray and Helen Walker.

In 2019 it was announced that Oscar winning director Guillermo del Toro would direct a new adaptation of the novel starring Bradley Cooper as Stan, Cate Blanchett as Lilith, Rooney Mara as Molly and Toni Collette as Zeena. The film aims to stick much closer to its source material and include the darker and more surreal, violent and sexual content of the novel that the original adaptation could not due to the restrictions of the time.