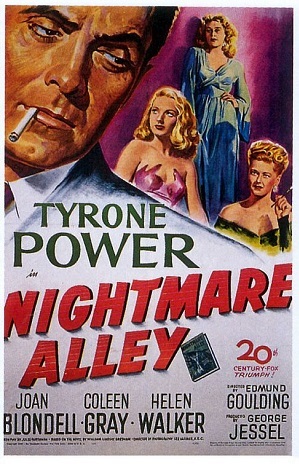 Nightmare Alley is a 1947 Film Noir directed by Edmund Goulding, based on the novel of the same name by William Lindsey Gresham.

Stanton Carlisle (Tyrone Power) joins a seedy carnival as the assistant to Mademoiselle Zeena (Joan Blondell). She and her alcoholic husband had a great, convincing system at "telling fortunes" until some misfortune caused them to come to the seedy carnival and work. Zeena hasn't told anyone their ingenious code. Stanton wants to know it and tries to seduce her, but she stays faithful to her husband.

Stanton eventually gets his way and learns the code, but later gets greedy and after living the high life with his innocent wife Molly (Coleen Gray) for a while. It all comes crashing down on him through his association with a mysterious and manipulative psychologist called Lilith Ritter (Helen Walker).

In 2019 it was announced that Oscar winning director Guillermo del Toro would direct a new adaptation of the novel starring Bradley Cooper as Stan, Toni Collette as Zeena, Rooney Mara as Molly and Cate Blanchett as Lilith. The film is set for release December 17, 2021.