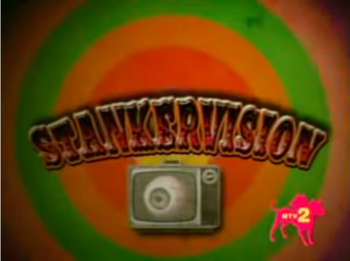 Stankervision was a short-lived sketch comedy created by Waco O'Guin and Roger Black that aired on MTV2. It was a televised repackaging of Waco and Roger's underground comedy "The Damn! Show". Stankervision began and ended in the year 2005. The show featured Bobby Possumcods, BoDean Lynn, Yucko the Clown, Inebriated the Koala and Regina Lynn. The former three made animated appearances in the better known Brickleberry, which was made by the same creators. A lot of jokes and characters you saw in Brickleberry were originally back in Stankervision.

Waco and Roger were still looking for a network to pick up Brickleberry when Stankervision came out. Waco stated in an interview given out by Animation World Network

he came up with the idea for Brickleberry all the way back in 2003. In spite of Brickleberry's inability to debut in the 2000s decade, they were lucky to have even gotten Stankervision out on TV at all.

The show was enjoying high ratings at the time, but was cancelled due to problems with sponsors.