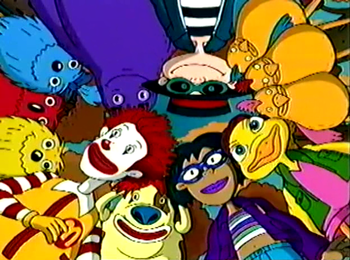 Ronald McDonald and the gang...ANIMATED!
Advertisement:

The first three videos would begin with live-action actors playing Ronald himself and his dog Sundae in their home, usually doing something that would foreshadow the main plot. The Call to Adventure would arrive in the form of a call from one of their friends, and Ronald and Sundae would depart their home and enter the outside world — getting animated in the process. The rest of the film would show whatever adventure they got up to with their group of friends, whether it was being chased by a bear, enduring the Hamburglar's schemes, or welcoming aliens from another planet, and at the film's conclusion, Ronald and Sundae would reflect on the lesson learned.

The next three videos featured a slight shake-up to the formula: whilst the first three films would be a contemporary story, the latter three films' stories would be presented as events that had already transpired. Sundae also stopped appearing in the live-action segments (though his voice is heard in the fourth and sixth ones), and Ronald himself would sing the opening theme song.

The VHS tapes could be purchased at your local McDonald's, usually with the purchase of a Happy Meal or an ice cream (depending on the restaurant). The final film is notorious for being very rare; it was only available by ordering off of the Klasky-Csupo website, and it already being in limited supply didn't help things either. For the next thirteen years, searching the Internet was useless, but as of late 2015, the sixth and final video was finally found and uploaded to YouTube for all to see.

Films in order of release:

The Wacky Tropes of Ronald McDonald: