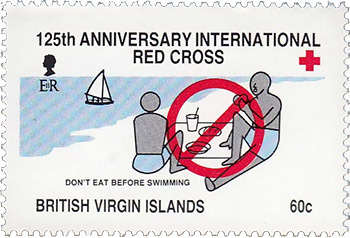 "But most importantly, after you eat, wait three full days, get a complete physical, have an ear candling, and press UP, A and START before re-entering the pool."
— Strong Bad, on pool safety
Advertisement:

Let's say you're going swimming at the beach or pool, when suddenly, hunger strikes. After eating, you jump into the water, but experience a stomach or muscle cramp, causing you to struggle to stay afloat. If you're really unlucky, you might drown.

Looks like you should have waited at least 30 minutes or an hour after eating!

This is an old wives' tale that has long been debunked.

While swimming cramps are not rare, and stomach cramps caused by the direction of oxygen away from the stomach muscles are debatable, there have been no reported cases of drownings or near-drownings from them. Why the stomach would be so sensitive to post-meal cramps when you're swimming, yet fail to suffer them if you're exercising out of the water, is never explained. As such, Don't Eat and Swim is a Dead Horse Trope. If it gets used at all anymore, it'll be either subverted or parodied (like a character getting a cramp after just dipping a toe in the water), but it won't be played straight.

The best thing to do in the event of a cramp suffered while swimming is to relax and tense the affected muscle, or stay afloat until help arrives. Otherwise, feel free to satisfy your cravings by the water.