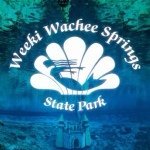 "The only city of live mermaids."
— Tagline
Advertisement:

Weeki Wachee Springs is a Theme Park in Weeki Wachee, Florida famous for its mermaid show. The show debuted in 1947. The official site can be found here

You can find out more at Wikipedia

"The Only City of Live Tropes"