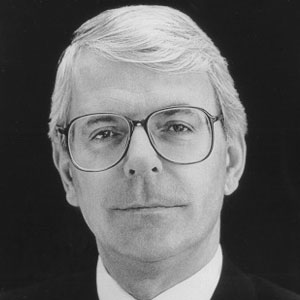 Britain's prime minister from 1990 to 1997, in glorious Technicolor.
"I like peas."
—Spitting Image
Advertisement:

Sir John Major, KG, CH, PC (born 29 March 1943) is a British politician who was the Prime Minister of the United Kingdom and the Leader of the Conservative Party from 1990 to 1997. He served consecutively as Foreign Secretary and Chancellor of the Exchequer in the Thatcher government from 1989 to 1990, and was the Member of Parliament for Huntingdon from 1979 to 2001 (it was called Huntingdonshire until 1983). Like Margaret Thatcher to Ronald Reagan, Major can be seen roughly as the Transatlantic Equivalent to George H. W. Bush.

In the wake of the ousting of Thatcher, Major took over the Conservative Party at a time they were trailing the Labour Party by 20 points and more in the polls. Not only did Major recapture support in the campaign (most famously making Literal Soapbox Speechesnote It was a tactic he had used in his prior campaigns for his seat on the Lambeth London Borough Council in the late 1960s and early 1970s.), but the 1992 general election with a surprise victory and a (still unbeaten) record 14,093,007 votes.note In his own constituency, he was re-elected with a personal majority of 36,230 votes over his closest competitor, then the largest any MP had won by since the Reform Act 1832 was passed. It stood until George Howarth was re-elected for Knowsley in 2017 with a 42,214-vote margin. Major ended up with a barely-working majority in the Commons of only 21 seats (in contrast, Thatcher had achieved 144- and 102-seat majorities in 1983 and 1987 respectively), but even this was mostly dismissed as a side effect of lingering resentment towards Thatcher, with most political commentators predicting afterwards that Major would likely call another election in 1994 or 1995 and win back the huge majority the Tories had enjoyed for most of the 1980s. Instead, everything swiftly went downhill from there.

Five months after the election, Britain was expelled from the European Exchange Rate Mechanism (ERM) in what was called "Black Wednesday".note This was a system where all European currencies were pegged together, as a precursor to the Euro. This unexpectedly helped the economy recover in the long run, but since the Conservatives had spent the last year trying their hardest and spending billions to stay in the ERM, it greatly damaged their reputation for good economic management. There was also significant progress in the Northern Ireland Peace Process — the only thing that prevented a full peace agreement was the government's demand that the IRA lay down their weapons first before negotiating. Despite these developments, Major's government was dogged by scandals, PR disasters, and Conservative infighting, especially over European issues. Having been in power since 1979, the Conservatives had little left to offer to voters, whereas Labour were regrouping and modernising under the leadership of Tony Blair. Rumours of leadership challenges came and went, resulting in Major calling a leadership election against himself in 1995 in an attempt to secure his control over the party. It worked, as Major (who had disappointed the party's Thatcherite right wing by being politically and temperamentally more moderate than she was) faced only token opposition from John Redwood and was easily re-elected, but it really just delayed the inevitable. In the 1997 general election, the Conservatives were routed by Blair's reformed Labour Party, losing over half their seats. Major resigned the leadership less than three weeks after he lost government.

Easily forgotten between the iconic personalities of Thatcher and Blair, caricatures tended to depict him as a rather boring, grey little man, an image that his large glasses, dull image, and habit of dressing in grey only encouraged. Major's stodgy old image in contrast to Blair's youthful one is ironic, as Major was one of the UK's younger prime ministers, taking office at age 47, just three years older than Blair when he took office.note While much hay is made about Blair taking office at age of 43, he was only four days away from turning 44. Thus, his distinction as the UK's youngest prime minister since 1812 was easily bested by the also 43-year-old David Cameron, whose own 44th birthday was almost five months after he became PM. Major himself was the youngest PM since The Earl of Rosebery was appointed just before his 47th birthday in 1894.

While initially considered one of the UK's worst prime ministers upon leaving office, Major is viewed much more favorably in hindsight. His reputation has improved especially sharply in The New '10s — something doubtless helped by the massive falling out of public opinion his immediate successor Tony Blair has suffered in the same period — and he is now a respected elder statesman and a sought-after speaker whose opinions carry a respectable amount of clout with politicians and the public. Some analysts now accept that he was underrated as PM.

Moreover, the '90s boom, the longest post-war boom, began under him. Crime began to go down, his decision to retain the Pound and not adopt the Euro is now seen as a very wise move (he claimed to have negotiated "game, set, and match for Britain" at the Maastricht Treaty in December 1991), and in foreign policy (Kuwait and other countries) did well. He and concurrent Irish Taoiseach John Bruton did most of the legwork behind the Good Friday Agreement, but neither stayed in office long enough to see its final ratification in 1998,note Bruton was voted out of his office a month after Major was voted out of his. allowing successors Blair and Bertie Ahern to finalize the deal and take credit. His term also saw his regular jousting partner in the Commons, the Labour leader John Smith, die of two heart attacks. The two men had had an excellent relationship away from the despatch box, and Major, obviously affected, reminisced

in the chamber about he and Smith would privately share "sometimes tea, sometimes not tea", an awkward-but-sweet remark that became famous. The improvement in his reputation is perhaps best illustrated by the fact that he was ranked as the third worst prime minister of the 20th centurynote Only Neville Chamberlain and Anthony Eden were ranked worse, and they oversaw serious loss of British prestige internationally in being seen to have helped start World War II and the Suez Crisis respectively. in a poll

among various academics and historians in 2000, before being ranked as the sixth best post-war prime ministernote Clement Attlee, Thatcher, Blair, Harold Macmillan, and Harold Wilson ranked higher, and they're noted for the economic prosperity and/or transformative social change that happened on their watch. in a similar poll

in 2016. An increasingly common assessment of Major is that his struggles as leader of the Conservative Party distracted the public from his many successes as prime minister, which are now finally being recognised.

Even some more left-leaning people, while disliking the Tories on principle, will concede he was a better leader then his successors. These include William Hague, Iain Duncan Smith, and Michael Howard, none of whom appealed to many non-Tories while they led the Opposition, David Cameron, whose austerity helped fuel polarisation and who called a Brexit referendum, which is seen as having damaged the country irreparably; Theresa May, who failed to achieve Brexit while pushing extreme anti-immigrant ideas leading her to lose her majority; and the notoriously untrustworthy and bigoted Boris Johnson, who is widely believed to have supported Brexit just so he could become PM, and who Major has always had a strong dislike for.

He is also one of the few people to have held three of the Four Great Offices of State (the exception being Home Secretary), having been at various points in his political career Prime Minister, Chancellor of the Exchequer, and Foreign Secretary.

John Major's father, Tom, was a circus acrobat. Many jokes were made about Major being the only boy to ever run away from the circus to become an accountant. He's not the only circus child to reject the circus life for a more stable livelihood by a long shot, but it certainly didn't help his image as The Bore.

Like many politicians, he had an embarrassing sibling: in this case, his brother Terry Major-Ball, who famously ran a company that made garden gnomes.

In 2002, a revelation broke out that he had had an extramarital affair with former Health Minister Edwina Currie MP prior to becoming prime minister; this was greeted with universal incredulity by the British media, as they couldn't conceive of him doing something so interesting.note Still, it dovetails nicely with his Back to Basics

campaign, an appeal to traditional values. This was never really much more than a bunch of platitudes about how people should be decent to one another, but nonetheless blew up in Major's face when it was interpreted as him promising to double down on the social conservatism of Thatcher's reign. As a result, left-leaning newspapers immediately accused him of being a bigot, while right-leaning newspapers initially applauded the campaign, but then turned on Major when he failed to deliver on his (supposedly) promised social conservative policies, and then a succession of Conservative politicians were caught up in a string of scandals, mainly sexual. But then again, Major could be the only PM in history who managed to make being attacked in Ten Downing Street by the IRA with mortar bombs from a nearby rooftop 'unmemorable'.

Another notable facet of Major's premiership was his initially poor relationship with concurrent American President Bill Clinton — something that was partially derived from Clinton inviting Sinn Féin leader Gerry Adams to the White House on St. Patrick's Day 1995, right when Major and Irish Prime Minister John Bruton were in the middle of peace negotiations with the IRA. Anglo-American relations deteriorated as a result, with many political commentators at the time wondering if it would spell the end of the "special relationship" between the United States and the United Kingdom. The relationship did repair by the time Major left office

, but he never enjoyed the closeness with Clinton that Blair did.

While mostly keeping a fairly low profile after leaving office (a trend he started by announcing his plans to see a cricket match at South Oval at the end of his concession speech after the 1997 election), Major returned to the limelight about two decades later by campaigning in favour of a second referendum to address and resolve Brexit, an issue in which he favoured Remain. The irony of Major pushing so hard for a second referendum when he worked so hard to deny the public a first referendum on Maastricht over 25 years earlier did not pass without comment. He also joined a lawsuit launched by activist Gina Miller to reverse the controversial prorogation of Parliament in 2019 by Prime Minister Boris Johnson, in what was widely seen as an attempt to undermine parliamentary oversight of the government's efforts to negotiate a Brexit deal and force a "no-deal" exit by fait accompli. This suit was successful, forcing Parliament to be reconvened. After yet another delay in Brexit was arranged with the EU, Johnson then called an election with cross-party support, and Major actively campaigned against his own party.note He backed pro-Remain independents who had been booted from the Tories for opposing Boris Johnson's Brexit plans — he did not endorse any party other than the Conservatives, or indeed, any other candidates. With Johnson winning the Conservatives their biggest majority since 1987, and every candidate Major endorsed going down to defeat, it appears he has irreparably poisoned relations with the party he once led going forward. (Ironically, it was once rumoured that fellow Remainer David Cameron had planned to appoint Major a hereditary peer, the first since another previous PM, Harold Macmillan.)

Major is the earliest PM who is still living. All subsequent prime ministers are also still alive, and he is the only one to have been knighted. He's also the most recent PM who never attended university — he took correspondence courses to be certified in banking.