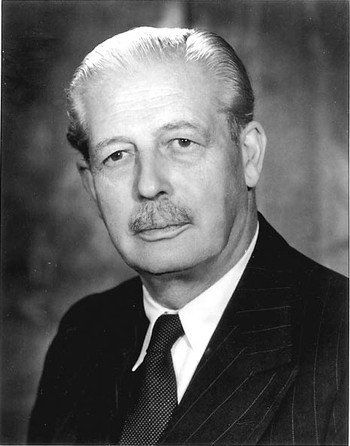 "Indeed let us be frank about it, most of our people have never had it so good."
"Events, my dear boy, events."
Advertisement:

Maurice Harold Macmillan, 1st Earl of Stockton, OM, PC, FRS (10 February 1894 – 29 December 1986) was a British politician and statesman who served as the Prime Minister of the United Kingdom from January 1957 to October 1963. He came to power after Anthony Eden resigned and won a landslide victory in 1959. In 1963, misdiagnosed with prostate cancer, he suddenly resigned.

Known as "Supermac" (a nickname coined by cartoonist Victor "Vicky" Weisz as an insult), Macmillan's premiership was a prosperous time for Britain, though not without some bumps such as a wage freeze, caused by balance of payments issues. He famously told Britons in 1957 that they had "never had it so good". In 1962 saw the "Night of the Long Knives", where eight members of his Cabinet were sacked in one go. The next year saw the Profumo scandal, which can be summarised as "Cabinet minister sleeps with prostitute who is also sleeping with Soviet spy" (or, even more succinctly, as "British politician sex"); much like the Watergate debacle in the US a decade later, it was a classic case of Minor Crime Reveals Major Plot. While nowadays this would likely be an embarrassing but not game-changing political scandal, by the standards of 1960s London the scandal and especially Macmillan's initially diffident response was enough to destroy the credibility of his government, all but ensuring that they would lose the following year's general election, and likely making it so that Macmillan would have been forced to stand down even without the incorrect cancer diagnosis.note Multiple historians have suggested since then that Macmillan actually knew well before his resignation that the diagnosis was wrong, but stuck with that excuse anyway just to avoid admitting that he had been forced to resign over the Profumo mess.

Mac got on well with John F. Kennedy, seeing himself as a kind of mentor to the young American President.note  JFK's late sister Kathleen had married into Mac's wife's family. Kennedy was known to address him as "Uncle Harold". Just before the Cuban Missile Crisis, he passed a copy of Barbara Tuchman's history book The Guns of August to Kennedy, with his recommendations. Earlier on he was also friendly with President Dwight Eisenhower, the two of them having met During the War.

Superior Firepower in the UK was increased during this time (the Thor missiles were deployed) and the decision was made to buy Polaris from the US. A reluctance to share nuclear secrets with France led to Charles de Gaulle vetoing the UK's first attempt to enter the EEC.

Besides the two quotes given above, he is also famous for his "Winds of Change" speech in South Africa in which he made it clear that black majority rule was inevitable (needless to say, his apartheid South African hosts disagreed). Several British colonies in Africa were decolonized during his premiership: Gold Coast (today Ghana), Somalia, Nigeria, Sierra Leone, Tanzania, and Uganda.

Before entering politics, Macmillan had been a soldier in World War I, one time, reading poetry while waiting to be rescued from no man's land.

Following Mac's resignation, Sir Alec Douglas-Home, who many Brits haven't heard of, spent a year as PM, before losing to Harold Wilson.

Like Edward Heath, a later Conservative PM with a reputation for moderation, he became somewhat critical of Margaret Thatcher, famously making a speech in which he is paraphrased as comparing Thatcher's economic policies to "selling off the family silver". Ironically on Thatcher's initiative he was created the Earl of Stockton - the last and only hereditary peerage awarded to a non-royal after 1965, and accordingly the last (to date) to a former Prime Minister.note Although two technically heritable viscountcies were awarded to senior politicians in the 1980s, both were without sons and so were de facto life peerages, with a precedence higher than the Barony given to life peers. Thatcher's husband Denis was created a Baronet in 1991, but a baronetcy, though hereditary, is not a peerage. Macmillan is also the last PM to date with facial hair (a moustache). In following another mustachioed PM (Eden), he broke a streak of alternating mustachioed and clean-shaven PMs which stretched back to 1923.

After "You never had it so good" (see above), his best known quote might be, "You know, I always thought he looked a bloody fool in men's clothes." "He" was Sir Laurence Olivier, who had been caught in a police sting operation to entrap suspected homosexuals.