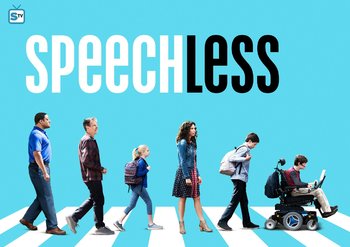 Speechless is an ABC sitcom which premiered in 2016, starring Minnie Driver and introducing Micah Fowler.

The series follows the DiMeo family, led by take-charge matriarch Maya (Driver) who does everything in her power to give her son JJ (Fowler), who has cerebral palsy, a normal teenage life. Unfortunately for the rest of the family —father Jimmy (John Ross Bowie), brainy middle-child Ray (Mason Cook), and hyper-competitive youngest Dylan (Kyla Kenedy)— this has resulted in entire neighbourhoods avoiding them and having to transfer schools six times in the past two years thanks to Maya's abrasive personality and inability to get other schools to accommodate JJ better. As the series begins, another move has taken the DiMeos to "the worst house in the best school district" (in this case, best also meaning mainstream) so that JJ can have a permanent aid in his classes. Though the initial aid is a poor fit, JJ soon befriends the school groundskeeper, Kenneth (Cedric Yarbrough) and appoints him as his voice, and the family finally begins to settle in.

The series has been lauded as groundbreaking for casting Fowler, who also has cerebral palsy, in the role of JJ. It was cancelled on May 10th, 2019, after three seasons.