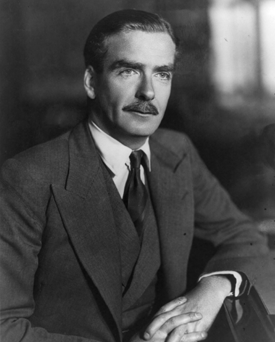 Robert Anthony Eden 1st Earl of Avon KG MC PC (12 June 1897 – 14 January 1977) was a British Conservative politician, who was Foreign Secretary during World War II. He was effectively the second-in-command of Winston Churchill for 15 years. He then served as Prime Minister from 1955 to 1957, easily winning an election in May 1955. Eden removed Churchill from office in what in any other country would have been called a coup d'etat. At one stage he was in the House of Lords Library, known as the Truro Room, trying to persuade a reluctant peer to come over to his side and oust Churchill; he was running Churchill down, accusing him of being an alcoholic, senile, "past it" and generally unfit for office, when a familiar voice came from a chair at the far end of the room: "And they also say that he is going deaf!" Eden squawked with fright and "left the room with the speed of a scalded cat".

As a result of his record as Foreign Secretary, Eden came to office with a reputation for being an excellent diplomat. That is until, in the second year of his premiership, when he set in motion the Suez Crisis of 1956. This was a scheme planned by the UK, France, and Israel in response to Egypt's prime minister/president/dictator Gamal Abdel Nasser saying he was going to nationalize the Suez Canal. Basically, Israel would invade Egypt, and British and French troops would come there on the grounds of separating the two armies and preventing war. In reality, the three countries were occupying the Sinai Peninsula, and they also hoped to remove Nasser from power. All three were shocked to find that the majority of voters in the UK did not actually support the war, and the international backlash was spectacular. Even the United States, which usually has excellent relations with the British on foreign matters, condemned the move, and President Dwight D. Eisenhower pressured the three countries to leave Egypt. Then it turned out that Israel forgot to burn the documents related to planning the invasion, making it clear to everyone that the leaders of the two European powers planned this from the beginning. Humiliated, British and French forces had to be sent back home just a few months after the Crisis began, and Israel left the next year. During said Crisis, he also memorably said that "We are not in a war with Egypt. We are in an armed conflict with Egypt." It crippled the UK's (until then massive) influence in the Middle East and was the beginning of the end of the UK's role as a major world power. Additionally, Nasser came out of the conflict with even higher standing at home, so this backfired in every possible way.

Plagued both by health issues and widespread ridicule for the Suez Crisis, Eden resigned less than two years after his premiership began, and went into a quiet retirement. Due to the major Epic Fail that was the Suez Crisis, Eden is usually held to be the worst British PM of the 20th century. It also doesn't help that as his tenure was cut short, he didn't have enough time to achieve a great deal. Of his other noteworthy actions, he also rejected the proposal of a economic and political union between France and Great Britain, proposed by French Prime Minister Guy Mollet, and declined to involve Britain in the discussions that would result in the Treaty of Rome and the birth of the European Economic Community. For much of the subsequent half-century this was seen as a foreign policy blunder obscured only by the catastrophe that was Suez; every Prime Minister who followed him, until the British populace finally voted to LEAVE the European Union in the 2016 referendum, would reverse course on this decision and pursue closer economic and political ties with Europe (albeit with varying levels of enthusiasm). On the decolonization front, he granted independence to Sudan. He also presided over the lowest unemployment level in British history, standing at just about 1%. (In comparison, the US has only seen it reach 2.5%.) Though still commonly regarded as the worst British Prime Minister, historical consensus has generally agreed that he was a victim of a crisis during his premiership that he handled in the worst way possible.