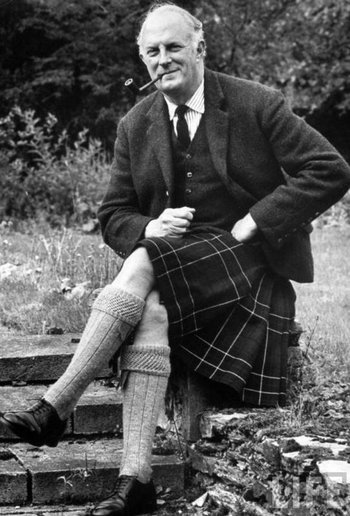 Sir Fitzroy Hew Royle Maclean (11 March 1911 – 15 June 1996) was born in Cairo to Major Wilberforce Maclean of the Queens Own Cameron Highlanders and of The Clan Maclean; and Glady's Francis Elaine Royale, daughter of a Royal Naval Officer. He was educated in the classics like a Quintessential British Gentleman as well as occasionally visiting home to hear some of the bloodthirsty tales of the hereditary Maclean clan bard.

In 1934 he was assigned as an aide to the British embassy in Moscow. During this time he made a number of scouting forays into the countryside of Russia that were the basis for his famous work Eastern Approaches as well as providing material for some of his later works on Eastern European and Central Asian history.

When World War II came, he enlisted in the British army, serving in the SAS in North Africa. He was latter assigned personally by Winston Churchill as envoy to Tito's Partisans in Yugoslavia. On retiring he married the widow of a naval hero and spent the rest of his life as a historian and author. If that is not enough sheer awesomeness he became the step-grandfather of the autistic piano prodigy Derek Paravicini. As well, not only did he have all that Real Life personal achievements in war and scholarship and all those interesting kinfolk, he was said to be part of the inspiration for James Bond.