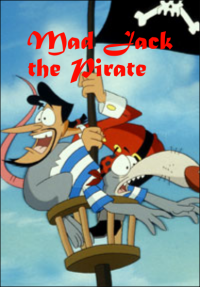 Animated Series about a luckless pirate and his anthropomorphic rat sidekick, Snuk. A wildly selfish jerk, Jack would probably be unsympathetic if not for the fact that he is absolutely the universe's Butt-Monkey. Imagine Bruce Campbell playing Black Adder, but as a Saturday Morning Cartoon, and you'll have an idea of what it's like.

Produced by Saban Entertainment, written by Bill Kopp of Eek! The Cat and directed by Jeff DeGrandis, fresh off their run on Toonsylvania. Aired on Fox Kids, was canceled after a short run, and now can't really be found in reruns, as there are no DVDs (except for Romania.... strange, isn't it?) available but YouTube DOES show episodes (and in English too).