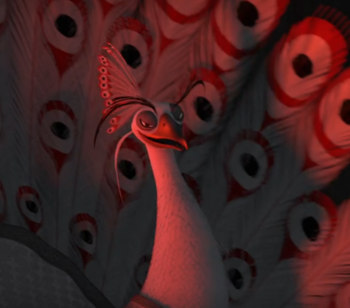 "Call in the wolves! All of them! I want them ready to move! The Year of the Peacock begins now!"
— Lord Shen, Kung Fu Panda 2
Advertisement:

Peacocks are known in real life for their extravagant feathers with colorful patterns. Because of how ostentatious these feathers appear, these birds tend to be depicted in fiction as characters who are vain, prideful, or self-centered. While some of them may still be mostly kind characters who are just fond of attention, others can be straight-up villainous.

Please note that the long, colored feathers are not the peacock's tail. Rather, it's called a "train", and the feathers are actually attached to the peacock's back. The peacock's real tail feathers are short and brown, and can be found under the train. Also note that, while some examples involve female characters (i.e. peahens), the big, colorful feathers associated with this trope are exclusive to male peacocks in real life.

This trope is the origin of the old saying "proud as a peacock," as well as the fact that a group of peacocks is called an "ostentation." The peacock is also one of animal symbols of the Seven Deadly Sins, i.e Pride (the other is the lion).

Subtrope of Animal Stereotypes. May overlap with Peacock Girl. Compare Cocky Rooster for another bird that is commonly depicted as arrogant. Not to be confused with Agent Peacock, though that trope's name does come from the stereotypical association between peacocks and vanity.

The Big Bad of Kung Fu Panda 2, Lord Shen's ruthlessness is only matched by his pride and ego.

The Big Bad of Kung Fu Panda 2, Lord Shen's ruthlessness is only matched by his pride and ego.