Film / The Muppet Musicians of Bremen 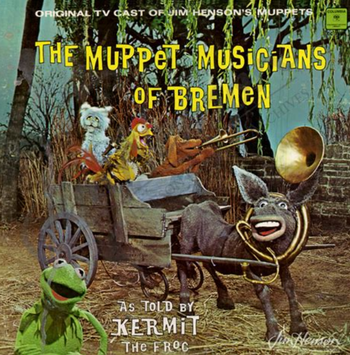 Narrated by Kermit the Frog, first aired in broadcast syndication and later rerun on HBO during the '80s, this special is a retelling of The Bremen Town Musicians, moving the location from a city to a southern town in Louisiana. It involves four runaway barn animals—Leroy the Donkey, T.R. the Rooster, Rover Joe the Dog, and Catgut the Cat—whose mean-spirited owners have either thrown them out or were set to kill them. With Leroy hauling a wagon of instruments (which his owner, Mordecai Sledge, had stolen), Leroy decides to become a traveling musician, in hopes that families will give him food and shelter, and after finding the other animals, they all join together to become traveling musicians.

This special was a little different from Jim Henson's past productions, in that very few of the Muppet performers lent their voices. Aside from Henson and Jerry Nelson, all of the voices were provided by outside talent. This special also featured impressive puppetry effects, particularly with the villains, who switch from being hand puppets in close-ups to full-bodied costumed characters in wide shots.

The Muppet Musicians of Bremen contains examples of