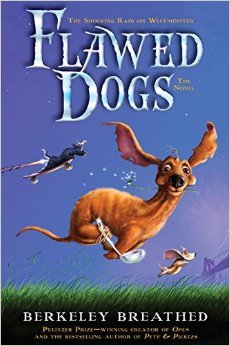 Flawed Dogs: The Novel: The Shocking Raid on Westminster, Flawed Dogs for short, is a children's novel and the first illustrated novel by Bloom County author Berkeley Breathed. It was published on September 17, 2009.

The novel stars a dachshund named Sam the Lion, who was specifically bred to be a show dog. He is adopted by a girl named Heidy, who is going to live with her uncle Hamish. Hamish owns a poodle named Cassius, who was also bred for dog shows. Cassius is enraged with jealousy over Sam, and plots to ruin his life. To this end, he frames Sam for various crimes, tricking his owners into thinking he's a mad dog, and casting him out. This marks the beginning of Sam's adventure, which eventually leads to him ending up in a dog pound, where he meets other dogs cast out by society for their abnormalities. Sam teams up with them in a revenge plan against Cassius and all the other show dogs.

An animated movie adaptation is in the works. It will be directed by Noah Baumbach and produced by Dreamworks Animation. There isn't a set release date yet.