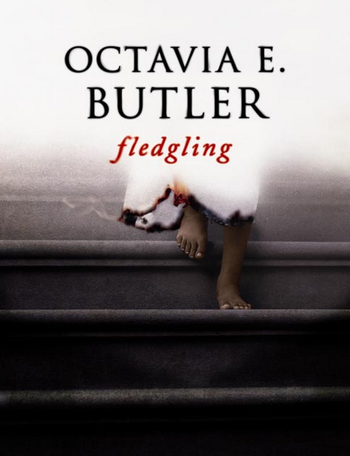 A little brown girl wakes up in a cave - hurt, confused, literally starving out of her mind. She devours any living thing unlucky enough to be near her until she heals, and then she meets Wright. Neither of them understand what draws them so inescapably to each other, but they give in to it, realizing together that the girl, Renee until further notice, is some kind of vampire. Together they fall into all that entails, searching for her lost family, trying to figure out just exactly what Renee's needs and abilities are, and how Wright fits in that. Then her father shows up, and...it gets interesting from there...
Advertisement:

Fledgling is a 2005 science fiction vampire novel by Octavia Butler, lauded at the time as a fresh take on the genre. As per her signature style, Butler takes a close look at the little Unfortunate Implications of the relationship between Ina, humans, and the little living revolution named Shori.

Note that the title Fledgling was also used for a 2009 Liaden Universe novel by Sharon Lee and Steve Miller.

Tropes contained in this novel include: