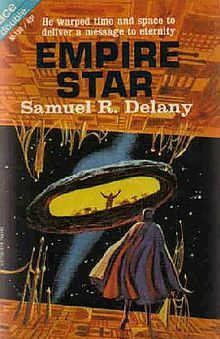 "Thou hast also encountered one of the major difficulties of the simplex mind attempting to encompass the multiplex view. Thou art likely to fall flat on thy face."
Advertisement:

Empire Star is a 1966 Science Fiction Novella by Samuel R. Delany. It is the story of Comet Jo and his quest to carry a message to the Empire Star.

"Comet" Jo is a young man who knows little of the universe beyond his agricultural homeworld. One day, he comes across a crashed ship and a dying man who hands him a strange jewel and begs him to take a message to Empire Star. So, despite not knowing where or what "Empire Star" is, Jo decides to set off on a quest which ends up teaching a great deal about the universe—and himself.

Starting with this simple framework, Delany adds a number of unusual narrative techniques and off-beat concepts, along with a dash of time travel, to create an extremely unusual and memorable story which nevertheless remains surprisingly true to its classic adventure-story roots.

Delany wanted the novella to be published as an "Ace Double" with his very-loosely-related novel, Babel-17, but the publishers didn't agree. First it was published as a double with a novel by someone else entirely. Later, it ended up getting paired a lot with another Delany novel, The Ballad of Beta 2. It wasn't until twenty years later that Delany finally got his wish and got Babel-17 and Empire Star published as a single volume.