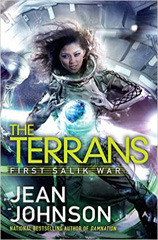 First Salik War is a Sci-Fi trilogy by Jean Johnson, currently consisting of The Terrans with the second part (The V'Dan) in the pipeline. It takes place 200 years prior to the Theirs Not to Reason Why series.
Advertisement:

Jacaranda "Jackie" MacKenzie is an experienced politician, former soldier, and powerful psychic. Ten years out of the military, she happily uses her natural and psychic gifts for languages and telepathy to serve as the Oceanic Representative on the United Planets Council. When precognitives around the world start having visions of her involvement in First Contact with oddly striped humans and octopus/frog-like aliens she is pulled from her position on the Council to serve as Ambassador of the Terrans.

Her task: find the alien civilizations seen by the precogs and lead the Terrans in joining the galactic community. This would all be so much easier if said galactic community wasn't currently engaged in an interstellar war...