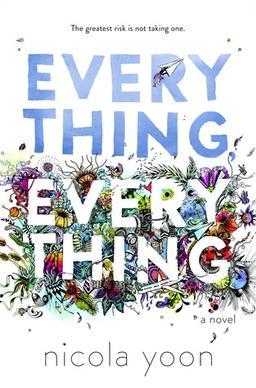 Everything, Everything is a Young Adult novel by Nicola Yoon. It tells the story about the Delicate and Sickly Madeline, who suffers from Severe Combined Immunodeficiency. In plain English, she's so incredibly susceptible to infection and disease that she can't ever leave her hermetically sealed house or interact with anything unsanitized. She has close to no contact with anybody except her mother and her private nurse Carla.
Advertisement:

But one day, a new family, the Brights, moves into the house next door, and Madeline becomes fascinated by the funny and handsome Olly, the teenage son of the household. Slowly, a friendship buds between the two...