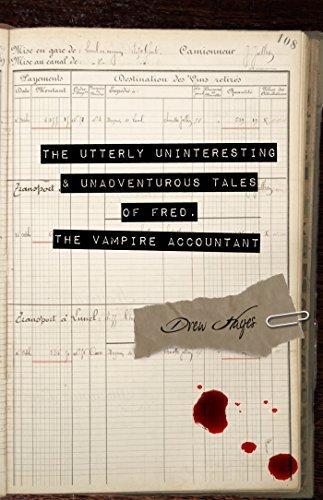 He's not suave but he can do your taxes.
I almost certainly do not know you; however, I shall assume you are a lovely person, and it is my loss for not having the opportunity to meet you. Still, I must assume you and I are connected in some way, for the works you are about to read are selections from a journal of my memoirs. I compiled these not in the belief that the stories within are so compelling they must be told, but rather because I found my expected life transition to be so shocking uneventful—at least initially.
— Frederick Frankford Fletcher, CPA
Advertisement:

Fred, the Vampire Accountant is a series of humorous Urban Fantasy novels by Drew Hayes. The novels focus on Frederick Frankford Fletcher, an ordinary CPA, who finds himself attacked by a vampire one fine night, himself becoming a vampire in the process. How does his life change? Not much, he's still shy, unsociable, and detests conflict of any form. Except now he's forced to work from home and drink blood (which he buys from a hospital administrator he knows).

Fred's quiet life is shattered, when he decides to finally take a chance and go to his high school reunion. While there, he reconnects with Krystal, an old friend of his, who has grown into a stunning woman. Then the reunion is attacked by a pack of hungry werewolves, and Fred finds out that Krystal works for a secret agency that hunts down bad supernatural creatures and is one of their top field agents. It's not long before Fred and Krystal start dating, and Fred's life goes from one excitement to another largely thanks to her dragging him into her work. He even makes a few new friends, such as a zombie named Albert and a weresteed named Bubba.

The series consists of the following novels: