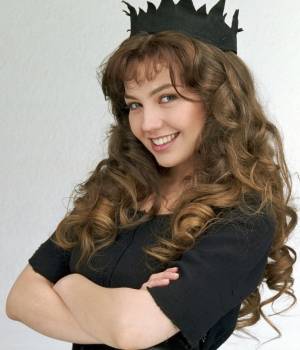 Literally: María from the Ghetto/Neighborhood, English title: Humble Maria (1995-1996). A popular Mexican telenovela starring singer Thalia, which skyrocketed her to international fame, as well as Fernando Colunga and Itatí Cantoral to a lesser extent. It is a remake of the popular 1979 telenovela Los ricos también lloran (The Rich Also Cry).

María is a 15-year-old orphan girl who loses her godmother, but before she passes, she asks the local priest not to leave María to fend for herself. The priest begs his wealthy benefactor, Don Fernando, to let María live in his home as a servant, but the man instead brings María in as his ward, drawing the ire of his wife Victoria and her niece, Soraya. María falls in love with the Don's Troubled, but Cute son, Luis Fernando, but also has to fight for his affections with the treacherous Soraya and her accomplices.

If you want to think about a Trope Codifier of the modern audience's view of a Spanish telenovela, look no further. The show contained several catfights, staged pregnancies, faked deaths, and heaps of drama. María la del barrio also had a recent resurgence in popularity among Spanish speakers because of the ridiculous antics of the main villain Soraya, as well as a remake for Filipino audiences in 2011.

Unmarked spoilers per the identity of the last Big Bad, as it becomes crucial to the plot of almost a third part of the whole series