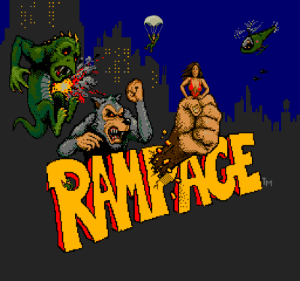 Destroy everything in sight!
Advertisement:

Rampage is a series of American Kaiju video games, starting with the 1986 arcade game by Midway Games. The games put you in the shoes of a giant monster, where you are tasked in each level to destroy buildings, eat people, fight the military and generally wreak havoc wherever you go.

The original game presents a simple premise that carries on for the rest of the series. You choose to play as three simultaneous characters George (a King Kong-like Expy), Lizzie (a Godzilla Expy), or Ralph (a giant werewolf), humans mutated into giant monsters after exposure to radiation from the nefarious SCUM Labs. The goal of each level is to destroy each building in the given city before time runs out. Along with that, you are able to eat helpless civilians as well as destroy helicopters, tanks, cars, boats and trains. The game runs on a cycle, as when you reach past level 768 (Plano, Illinois), you return to level one (Peoria, Illinois).

The first Rampage was ported to almost every Atari console out there from the Atari 2600 to the Atari Lynx, as well as the Commodore 64, MS-DOS/IBM PC, ZX Spectrum, NES, and Sega Master System. It should be noted that the NES, Sega Master System and Atari Lynx versions actually end instead of going through a cycle. The NES version only supported two characters, omitting Ralph, while the Lynx version kept all three while also adding a fourth character, Larry the rat. Rampage has since been included on various classic compilations game sets such as 2003's Midway Arcade Treasures. This game and Rampage: World Tour are also available as a bonus feature in Rampage: Total Destruction. In 2000, Williams Electronics had Rampage as well as other Williams games licensed to Shockwave to test out their online gaming platform Shockwave Arcade Collection. The game is also available for the iOS through the Midway arcade app.

About a decade after the first game, a sequel was released entitled Rampage: World Tour, which incorporated more moves and power-ups, a more cartoony art style and plenty more cities and locations to destroy. It was followed by console-exclusive games including Rampage 2: Universal Tour, Rampage Through Time, and Rampage Puzzle Attack, all sharing World Tour's style of gameplay and design. The most recent game in the series, which brings the series into three dimensions is Rampage: Total Destruction, released in 2006. Total Destruction currently has the largest roster of monsters to choose from, allowing you to play as up to 30 uniquely designed monsters.note there is an extra 10 exclusive characters included in the Wii version A reboot of the series was planned to be released for the Kinect for Xbox 360 sometime in 2012, but the game never developed past a piece of concept art.

A film adaptation of the game was in development since 2011. New Line Cinema originally attached John Rickard to direct the project, although he eventually left after the film got stuck in Development Hell. It was later announced in June 2015 that Dwayne Johnson would star in the film, with Brad Peyton and Beau Flynn—who previously worked with Johnson on San Andreas—will respectively direct and produce the film. The film was released in 2018 and pits Johnson's character against the original three monsters, while Larry made a cameo appearance. It also has a videogame adaptation that doubles as a redemption game.